These are words of Babaji and is typed here in direct speech.  For the new reader's sake, I have added in brackets or italics. 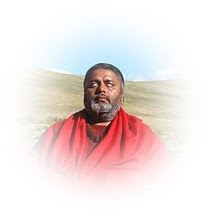