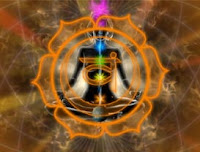 Oops! One topic that is always restricted and shut down deep within but still which is battled every now and then. Lust becomes one of the greatest obstacle for a spiritual aspirant and more difficult because one cannot discuss this openly as we discuss other spiritual matters with each other or in forums.  Now, I am not an expert in this subject but know that I am one amongst you. This is an in-depth subject and I am only expressing a normal layman view just trying to help you know that noone is alone in this. Let me become the book and let me become the reader here :)
Lust is one of the greatest obstacle in spirituality as this is the same precious energy that is used up for spiritual progress. In lust the lower chakras are more dominant. It flows from swadisthan and below.  In lust the energy always flows down to the sexual organs and that provokes the release of that energy though different acts. Babaji often mentions the difference between love and lust.  He says lust is experienced at the lower chakras and love is always experienced at heart chakra. When one gives unconditional love, the energy always moves upward and flows out from the anahata (heart) chakra.    Babaji says the difference between love and lust is that during lust one is blissful during only that period and with love when you are not experiencing love you are still in bliss. Here is a video where Babaji shakes off the normal interpretation of raas leela and how one misunderstands the raas leela of Sri Krishna as the carnal pleasures.
Different yogis explain different methods of conquering lust which include different practices, awareness, kriyas, and some even ask not to treat sex as disgrace because even the best of saints were procreated through the act of sex. A grihasth yogi uses sex only for procreation and not for carnal pleasures. When sex is only used for stimulation and pleasure it becomes the animal instinct.  A few years back when I was reading the" Autobiography of a Yogi" of Paramahamsa Yogananda I was surprised to read the following:

Early in their married life, my parents became disciples of a great master, Lahiri Mahasaya of Benares. This contact strengthened Father's naturally ascetical temperament. Mother made a remarkable admission to my eldest sister Roma: "Your father and myself live together as man and wife only once a year, for the purpose of having children."

However, this might not be possible for all since there are so many psychic impressions that we carry and most of these impulses are suddenly triggered when we see or come in touch with something in the world that has something to do with the deep impressions held in our subconscious mind. That is why Babaji never places any do's and dont's in ShivYog. He never says "Don't do this or don't do that."  He just emphasizes in nishkam sadhana which will slowly take care of all these things. However, I thought I should have shared what everyone all face and none speak of. Many struggle alone with no one to ask this. Most of the time there is fear and guilt. Fear and guilt are most difficult emotions since they get stuck within us very easily and is are very difficult to let out. They are caused due to our social conditioning or wrong perceptions.  Like, fear may be instilled through religion, parents, teachers, superiors  that something is bad and a sin and the moment that happens one is filled with guilt. But the act is normal than suppressing and creating further problems. More attention should be given to dissolving that fear and guilt and taking responsibility to overcome the struggle.  Here is another video of Yogiraj Gurunath Siddhanath, a himalayan master who speaks on the subject. 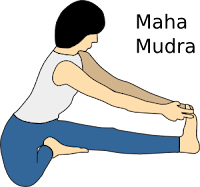 The mahamudra that the master speaks of in the above video.
In my first shivir with Babaji in Pune 2008, Babaji had taken a few moments to explain about the same subject to the youths. Thanks to my book and pen that jotted down everything so that it could be reproduced now. Babaji mentioned about the four stages of life :

Babaji further said that "The swadisthan stimulates the sex organs and when shakti rises all emotions rise, including lust.  If this sexual energy is channeled upwards, then it becomes more creative energy. When shaktipath happens, you have to learn to pull up energy or energy will leak out from below."  Babaji concluded, "Never have guilt."

Babaji then also gave a simple suggestion to channel this energy. "When you go to pass urine, stop and release atleast 20 times and do not expel at one time." 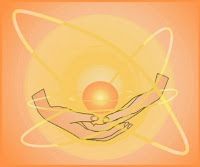 Another method he said was to stand up and do the moolabandha kriya, that is to pull up the perineal muscles (muscles between the anus and sexual organ) and imagine you are pulling it towards the sahasrar. While doing this he asked to hold both hands, the fingers of both hands touching each other with palms up just below the swadishthan (as shown in this image) Then to move both hands symbolically upwards passing the Manipura, Anahata, Vishuddha, Ajna and over the Sahasara and throw the palms over the head to the back of your head. While this is done the moolabandha should be done and energy from the swadisthan (navel) should be imagined to be distributed into the upper chakras. This kriya should be done twice upwards and once  in the reverse way from the back of the head to the swadisthan.


This kriya is explained a bit by Babaji in the following video. Also he explains in this video how to channel energy of children if they get distracted and anxious about sexuality.


Babaji also asked to do the vajroli asana (you may google up this one) whenever possible.
If there are any other references or phrases of Babaji on the subject, readers kindly add it to the comments here.