Mysore Yagna Experience (March 5th to March 7th 2010)
The mysore yagna was a very beautiful event. This was the first time I ever attended a yagna in my life and I had this opportunity of doing the first ever homa under the shadows of Babaji and Ishanji.
The three-day homa was fantastic. Pandits were called from Bangalore and the entire atmosphere was vibrating. Everything was well organized by the organizers and our heart-felt gratitude to them (especially Shivmoorthyji).
At the finish of the yagna, Babaji mentioned that he will be doing more yagna now, especially in north India and the next one will be in Ahmedabad..
On the last day babaji was very very happy and he was showering his gratitude and blessings to all involved in the program and all who made it possible. He said that he was very happy that the brahmin pandits did the "perfect" yagya in just the right way and Lord Mahamruthunjay was happy. He pointed out to certain aspects of how when the main pandit said "agni prajwalith kare" the agni spontaneously flamed up and the fire lit and danced happily, which babaji says is a great sign of the presence of the Lord and gods.. There were 108 homa kundas and each person involved in the yagna were provided with ghee and all other samagree from time to time by the sevaks. The main kunda was in the center of all the other kundas and was involved by Ishanji who sat facing North. Babaji was on the stage facing east. As the homa began, babaji sat in deep meditation most of the time facilitating the yagya. Ganapathy homa, Navagrah homa and rudra homa was done prior to doing the Mahamruthunjaya yagna. People who did not participate in the homa offerings were seated around the location and also participated whole heartedly. Babaji assured that the blessings of the yagya will be passed on equally to all those doing the homa as well as all those involved present there. All present for the homa were also offered a yellow chadar with "om namah shivaya" printed all over it. On the last day of homa, babaji tied around his head the "chadar"
After the homa that lasted for about four hours in the morning all were offered prasad. Then all gathered back in the evening in another open auditorium behind the homa ground where from 7 to 8:30 pm babaji graced everyone with Shiv kripa. On the last day, babaji was very happy and he was offered the typical south Indian cap which he wore happily over his head and danced and laughed as he was explaining the Shiv mahapuran, which was about the description of Lord Shiva.

About 2012, he didnt say much but he did mention that yagyas were to support the ascension of earth. Planet earth and all its inhabitants are moving to a higher dimension. Thus to make this process easy one must purify oneself by doing sadhana consistently. He also added that those who dont till then will suffer. (By suffering here Babaji means that one will not be able to match with higher frequency and it is well know that higher and lower frequency cannot stay together. So when the earth moves to a higher frequency all that vibrates at higher levels will go with it and all that vibrates lower will obviously face a lot of (self-created) suffering.)


His main message during the evenings were on being an alchemist, where you dont expect and try to change people, but you change yourself and see others around change. He also spoke again of 2012 where he asked people to do sadhana and purify themselves as the ones who dont will have to suffer. Babaji also sent healings and did mantra deeksha to all present. The people of Mysore are very soft-spoken, calm and very cultured people. So, overall, a wonderful experience it was being in Mysore with Babaji, Ishanji and all saadhaks! 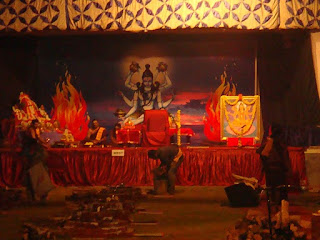 .
A full view of the ground where 108 homa kundas were being set up. 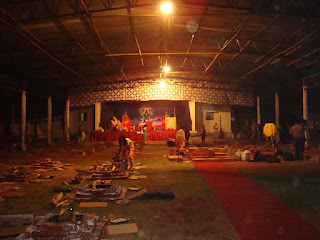 While me, Arpita and other volunteers were setting up the bricks for the homa kundas. 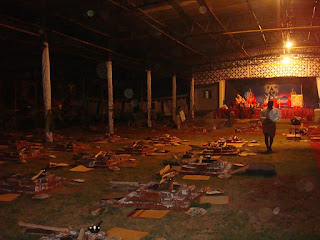 There were many other pics too which I will upload as soon as Arpita sends me. Are you listening Arpita???? :)