Once again the charm and grace of Babaji lit up the shivir at Goa. This was the first time a shivir was conducted in Goa. The venue was at BITs which is over 188 acres of land that is well equipped with all amenities situated on the banks of Zuari river. The clean and neat hostels and with the huge mess with good seating capacity made it very convenient for the sadhaks. I must thank the organizers who did a fabulous job by choosing this venue. 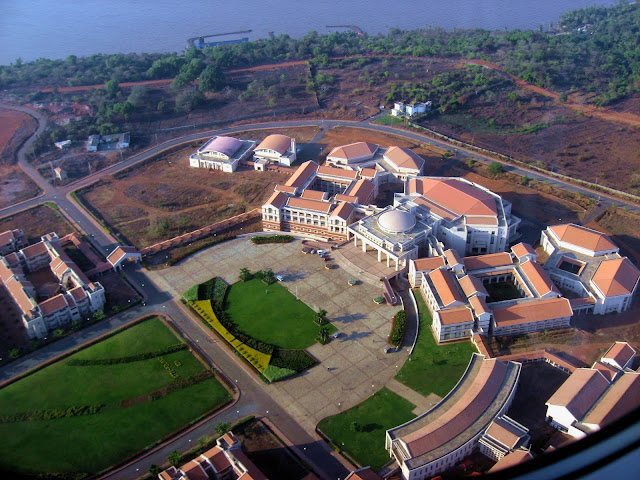 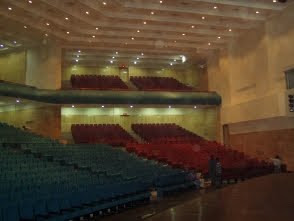 The auditorium was pretty huge and was close to the hostel and mess that made it even more convenient. Shuttle buses were organized for people to shuttle not only from Panjim and Vasco but between also to shuttle between the canteen and auditorium. Though the climate in Goa is pretty hot in May, the breeze from the Zuari river kept the temperature tolerable. Most beautiful were the huge green lawns spread out where we spent most of our evenings meditating, singing, sending healing, chatting, discussing, and having great fun. It was so much like a big big home where a whole lot of family lived together under the grace of the father of the family.

I was awed to see so many children this time, aged as little as even 3 years. Babaji almost everyday reminded that children are divine and they should not be hurt or neglected. He constantly gave messages to parents to shower them with unconditional love and never to criticize them. He said that kids are connected to the divine till the age of five after which they slowly start becoming conditioned to human upbringing and the cord from their sahasrar connected to the divine eventually gets cut off.  He reminded that they are all coming to earth at this time for a special purpose. Surprisingly, none of the children created any disturbance at any point of time during the entire shivir. They were totally silent and calm even when all were in sadhana for hours in silence. They did not do any meditation but looked all around silently seated in their places. I met and befriended a little angel about 3 years old who often sat out in the hall out of the auditorium during breaks with her grandfather and helper. She carried a beautiful name - Saanvi. She spoke Marathi. She recited the Ganesh Stuthi with such accuracy in tone, rhythm and pronunciation. As she played with the toys in her hand, I sat in front of her and asked her in Marathi why she has come and she replied "shivir". Then I asked her whom she came to meet here. She replied, "Avdhoot Baba!" I asked if she met Babaji since I had seen Babaji blessing kids and she said yes. When I asked what did he say, she replied, "He kept hand on my head and said Bless me!" Yes, 'bless you' was what she was intending to say. She then excitedly told all people who stopped to look at her that Babaji told her "Bless me!" Then I asked if she could give me a little healing and she immediately sat with her hand raised and palms up, her little fingers spread out and closing her eyes tight shut sent me Sanjeevani! Don't know what her intent here was or what did she think with her eyes closed but I am sure love flowed out of her. It is amazing how the kids are. They are born divine. They are truly connected to divinity and so they do not have any difficulty connecting with masters like our Babaji. Everytime Babaji walked onto the stage, he walked through the first door of the hall entrance and little kids gathered up there just to catch his attention. They did everything they could to catch his attention while he walked in and out of the hall. Most of the time Babaji stopped to look at them and placed his hands over their heads to bless them. Some children lifted up their Golden Books high enough for Babaji to see and Babaji acknowledged them back with raised eyebrow smiles. 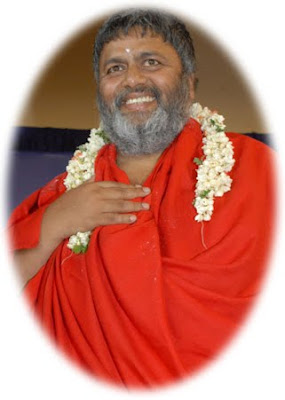 Baba said that we must all know why we have come on earth, to find out what is our soul purpose and manifest it through the Golden Book. Babaji also shared that when he asked himself years back what was his purpose of life, he got the answer that it was to give unconditional love and since then Babaji has been doing the same. Babaji strongly recommended doing the Nachiketa Agni Dhyan to heal the past and clear negative psychic impressions. He also reminded that a sadhak has to do sadhana importantly and not to sit back thinking everything will happen on its own. He said that sadhaks now have the grace of Sanjeevani that will help the sadhak to manifest all their positive desires and burn negativities provided one does regular sadhana.

Babaji stressed more on doing advait sadhana (nonduality) than dvait upasana (duality) and on and often repeated that ShivYog is based on advait sadhana (nonduality). He spoke extensively about ascended masters and spiritual invisible guides who are always with us. By doing more sadhana one raises their vibrations and ascends to higher level and as one ascends even the spiritual guides who have been assisting us also ascend. Once they ascend, they leave us showering us with gratitude and blessings and proceed with their journey and new guides on that level come to assist us. So, he said it is important that we acknowledge them and thank them for their divine guidance and support. He said that one can get rid of all problems and avoid creating further problems by forgiveness and by being nonjudgemental at all times.

The last day of Shambhavi was a special one because Babaji declared that we will all be doing the MritSanjeevani with the evening sun and that too out in the lawns below the guestroom where Babaji stayed. It was an awesome experience. This place was almost a kilometer from the auditorium but well within the campus. The sevaks put up all the sound system and hosted a pendal for Babaji and we all sat on the slopy hilly lawn facing the evening sun while Babaji sat just behind us and taught us the sadhana. It was just wonderful to be able to do this directly facing the sun, in nature with grass and trees around with birds chirping and cool breeze blowing across our faces. It was a great experience with Babaji sitting so close to us and even more pleasant  to see Babaji explaining things to us as his hair and beard blew across his radiant face.

On the first day of Sri Vidya Babaji gave a great experience of kundalini awakening and inspite of the visible experiences some sadhaks had, he said it was mild. I was imagining if this was mild, what would be anything more than this. Babaji again said, "It is Guruma's wish that I go slow with process to make things easier for sadhaks." Babaji and all laughed as he continued, "She says that I should behave in public." Babaji kept assuring all that there is nothing to fear and he is with everyone. As he did the shaktipat all had different experiences and many were in state of peace and tuirya avasta, which many described later as "falling asleep". The first two days of Sri Vidya was too pleasant and blissful. In one session he took us into deep trance and kept us floating there for about 3 hours! When we "came back" from that state it was a disbelief when Babaji said it is 7 p.m. 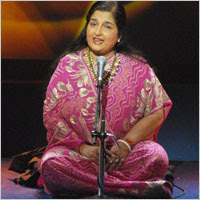 This shivir was also special because of the presence of Anuradha Paudwalji who had come to attend the shivir. Babaji one day humbly requested that he would like her to sing for us which she did. She sat right in front of babaji on the stage and humbly offered all her songs to Babaji and thanked Babaji for the calling that she had with Babaji's voice after she attended Prati Prasav with Ishanji. Babaji said that he is "reading" messages from sadhaks that they want more and requested her to sing the next day also. Her songs were just brilliant and it radiated so much of vibrations as all along with Babaji joined singing with her. As she ended, Babaji gracefully thanked her and said that he too had enjoyed listening to her bhajans long back when they were recorded and sold as cassettes. Babaji's musicians were excellent as they played all her songs in perfect synchronicity. They were also sharing their skills back in the hostel, playing instruments and singing in the evenings, as they stayed in the same place. Our special gratitude for them. Next time, I shall put up more on these little-known people who work so much for Babaji and us to create such a great ambiance in the shivirs.

Finally, on the last day of shivir Babaji gifted all little ones with battery-operated toys. He operated one car and it's lights began blinking and as the car toy began playing a hit song and Babaji moved and shook in excitement like a small child  with his eyes wide open. He asked that the car be run on the stage. As he continued talking with us, the car continued doing it's rounds on the stage with the hit hindi song. Then asked each child to be given the toys.

Every time Babaji has a special message to carry with every shivir. This time Babaji emphasized on:
Babaji also emphasised about the approaching 2012. He said that he cannot say anything directly but can give hints about it and how a sadhak can prepare for it. He spoke indirectly that:
Now, if you are wondering how can everyone do all these things, it is again a matter of your belief to create your own destiny - Golden Book. Babaji ended the shivir asking everyone to go out and spread the light that he has given us, which he received from his gurus and sang....

Thank you Babaji for your divine guidance, blessings and support to humanity and all living beings!