These are notes from the Bangalore Shivir (August 2010)

As usual this shivir also came up with interesting and newer methods of sadhana.  Babaji also gave the Varalakshmi mantra deeksha.  Babaji also asked to send articles and experiences of sadhaks to the ashram as Babaji plans to make CDs and books available for future. Something that I noticed this time is that Babaji made all do a lot of sadhana some days we spent almost 11 hours in the shivir. More of spontaneous direct healing also was seen in this shivir with Babaji addressing lot of public queries and giving direct healings.  This shivir's theme was ASCENSION.
There were a group of doctors also present this time and they volunteered specifically to do studies on 30 volunteer sadhaks. All the medical reports done on modern medical equipments before and after the shivir were read out by the doctor on the last day, that showed healing and progress in all reports. 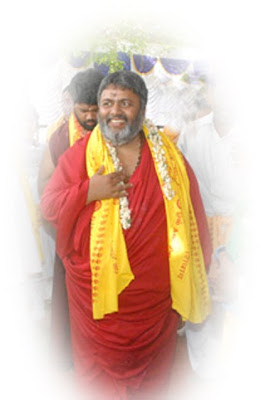 
To see the video of this song click here.

Ground all the above into powder and keep in container.  Every morning and before sleeping at night 2 teaspoons in 50 ml water.  At first it might be a little difficult in taking but eventually it will be adjusted by the body. Make this a daily habit and all impurities stuck to the intestines will get flushed out and other toxins will be thrown out.